For about 10 years, the property on Industrial Park Road in Greensburg sported a sign proclaiming it the future site of Jane Todd Crawford Hospital. Many wondered when – and if – the new hospital would ever become a reality.

And now it has. 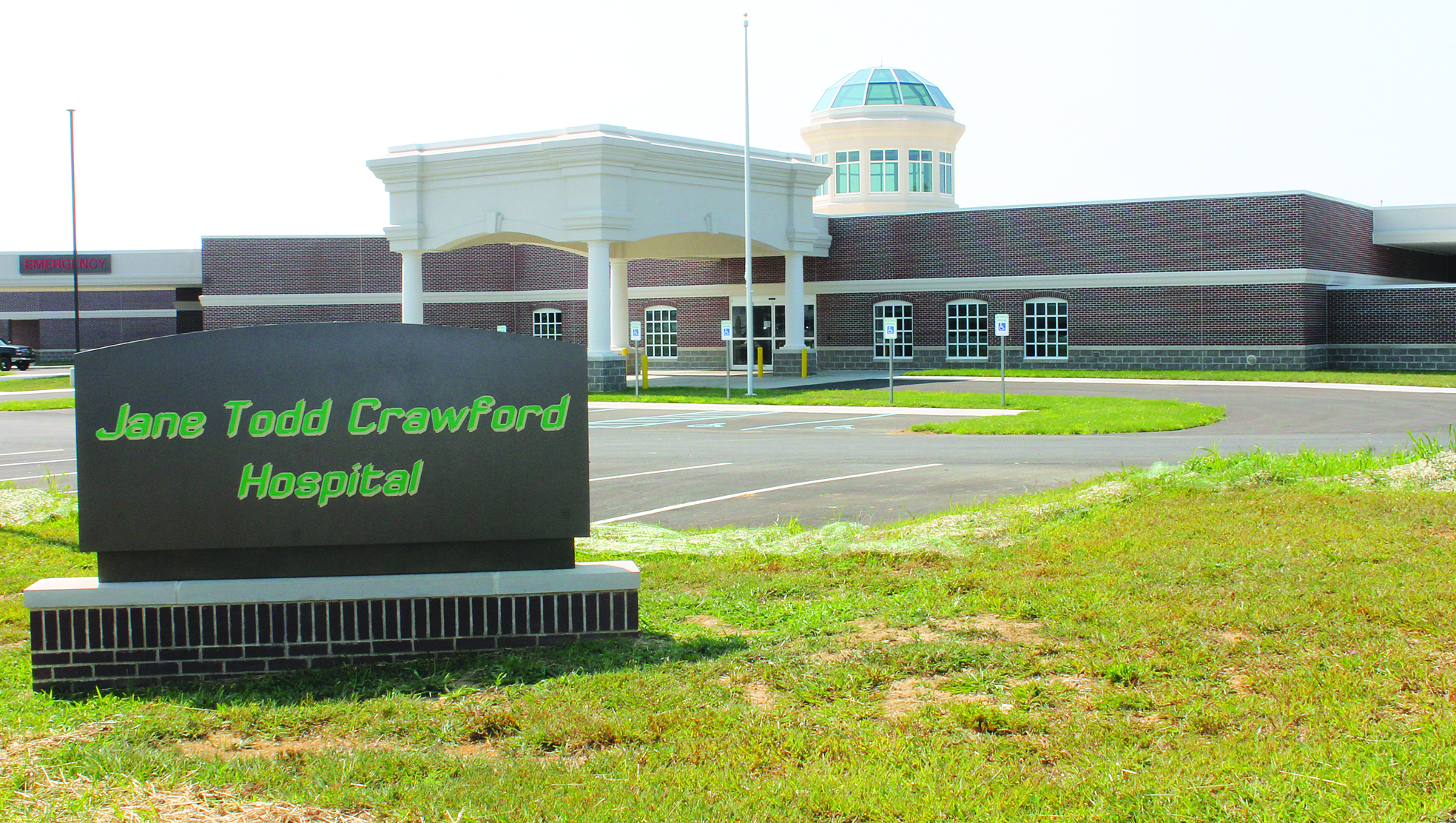 Thanks to the perseverance of many who refused to give up on making a new hospital a reality, the community can now be a part of the new Jane Todd Crawford Hospital’s official Grand Opening on Saturday, Sept. 24.

“We’ve waited a long time for this, and we’re so proud and happy that this new hospital is getting ready to open to serve the residents of Green County,” said Rusty Tungate, Administrator/CEO of Jane Todd Crawford Hospital.

While many people have watched the construction of the new hospital since ground was broken on Feb. 26, 2021, the public will get its first look at the interior of the facility on Saturday as guided tours are a part of the Grand Opening Celebration. Lunch will also be served to all those attending, Tungate said.

“We want the community to very much feel a part of this,” he said. “Jane Todd Crawford Hospital has served the residents of this area for 60 years, and will keep on doing that well into the future.”

The event gets under way at 12:00 noon Central Time with a short program featuring remarks from Tungate, along with JTCH Board of Directors Chairman Ruthie Shuffett, and national, state and local dignitaries. A ribbon-cutting is set for 12:45 p.m., followed by the lunch and guided tours. Visitors will be able to see all departments of the new hospital, where department directors and other employees will be on hand to answer questions.

The new 25-bed Critical Access Hospital (CAH) features 46,760 square feet. It was designed by JRA Architects of Lexington and built by Doster Construction Co., which is headquartered in Birmingham, Ala. Also involved in the project were CMTA of Lexington, Brown and Kubican of Lexington, and ACES of Bowling Green.

The $26.1 million project also includes two administration buildings and a maintenance building, which sit adjacent to the hospital.

The new Jane Todd Crawford Hospital will replace the existing facility on Milby Street, which opened in 1962. Plans for that structure have not been finalized at this time.

Wade Cave, JTCH’s Special Projects Coordinator and liaison for the hospital, has been involved with the project from the beginning. A first for him, he said overseeing the building of the new facility has been challenging at times, but well worth it.

“This has been a fun and exciting project,” Cave said. “Although stressful and overwhelming at times, we were able to overcome the obstacles and build a wonderful facility for the people of Greensburg and surrounding counties.”

Cave expressed appreciation to Tungate and the board for trusting him with the project, and has relished creating positive working relationships with many subcontractors, architects, engineers, and especially those involved with Doster.

“There are many people who deserve recognition for this project, especially our Board of Directors. This group has served the hospital for many years and without their dedication, this wouldn’t have happened,” Tungate added.

Besides Chairman Ruthie Shuffett, other members of the board include Valerie Perkins, Joe Shuffett and Steve Lewis. All have served on the board for at least 16 years and have been instrumental in planning the Grand Opening Celebration, along with many features in the hospital.

One thing visitors will notice right away upon entering the new hospital is the towering cupola in the lobby. Ringing the interior of the structure are 12 80” x 38” pictures of various attractions found in Green County. The photos were all taken by local photographer/historian Lanny Tucker.

Also displayed on a wall in the lobby are framed, lighted drawings by local artist Betty Jo Shuffett, which depict the story of the hospital’s namesake, Jane Todd Crawford.

“We are so grateful to both Betty Jo and Lanny for the contributions they have made to our new hospital,” said Ruthie Shuffett. “And we’re so proud that we’ve been able to provide this new hospital to the citizens of Greensburg and Green County. This has been a dream for the community that has been a long time coming. Now that it’s here, it seems surreal.”

While the Grand Opening for Jane Todd Crawford Hospital is being held this weekend, Tungate said it will actually be a few weeks before the hospital will transfer its patients and begin full operations at the new facility. Moving is projected for Oct. 15-16.

“We’re definitely looking forward to begin serving our residents at the new hospital,” Tungate said. “Many, many thanks to all those who have made it possible.”